Fed hikes and hints at six more this year

The Fed officially kicked off its tightening cycle yesterday, raising interest rates by 25 basis points. Even though the rate hikes themselves are fully integrated into money markets, the central bank has taken a hawkish tone by suggesting six more rate hikes this year through its “dot plot” forecast.

That’s exactly in line with market pricing before the event, but it beat even the wildest forecasts of economists, who expected a slowdown. Chairman Powell spent much of the news conference stressing the strength of the U.S. economy and arguing that it could absorb tighter monetary policy without slipping into recession. Overall, we conclude that the Fed is serious about fighting inflation. There’s a feeling they’ve waited too long for the normalization ball to roll, and the latest commodity shock adds to that urgency because it means inflation will peak at a higher rate and take longer time to reach the peak.

Despite the Fed’s clear message to tighten financial conditions, market participants did not cooperate. Stocks on Wall Street closed with spectacular gains, while the dollar fell almost across the board, which was shocking given the overall hawkish message.

Several factors could explain this odd response – Powell, for example, seems less than comfortable with raising rates in 50 basis point increments, and there are no new revelations about the balance sheet shrinking process. However, these arguments do not seem very convincing. Instead, it could be a classic case of “sell the rumor, buy the fact” in the stock market. Many of the big players may be holding protective hedges such as puts ahead of the Fed decision, and once the event passes and volatility cools, they will sell those hedges, triggering a relief rally. The uncertainty of travel is often more painful than the arrival of the market.

next bank of england

In broader markets, sentiment was positive for much of the week, with traders scrambling to price in the prospect of a peace deal in Ukraine. The latest reports suggest that negotiators have made significant progress towards a ceasefire, with Moscow willing to pull out if Kyiv pledges to remain neutral and accept a cap on its troops. Optimism that these talks will come to fruition has led to a meaningful recovery in the euro, mostly against the yen. The pound is also a beneficiary of peace bets, outperforming even the war-torn euro in recent sessions.

The Bank of England will end its own meeting today. A quarter of the rate hikes have been fully priced in, with the market implying a one-in-three chance of a half-percentage-point move. Therefore, the initial reaction of the pound will depend on the magnitude of the rate hike. To be sure, this is not the time for the Bank of England to raise interest rates recklessly, as the economy is already headed for a slowdown, despite rising inflationary pressures.

Finally, the Bank of Japan is also due to meet early on Friday, but with the economy barely out of deflation, it is unlikely to signal an exit from decades of easy monetary policy. The yen remains at the mercy of risk appetite and the actions of foreign central banks until the BOJ executes its own U-turn. 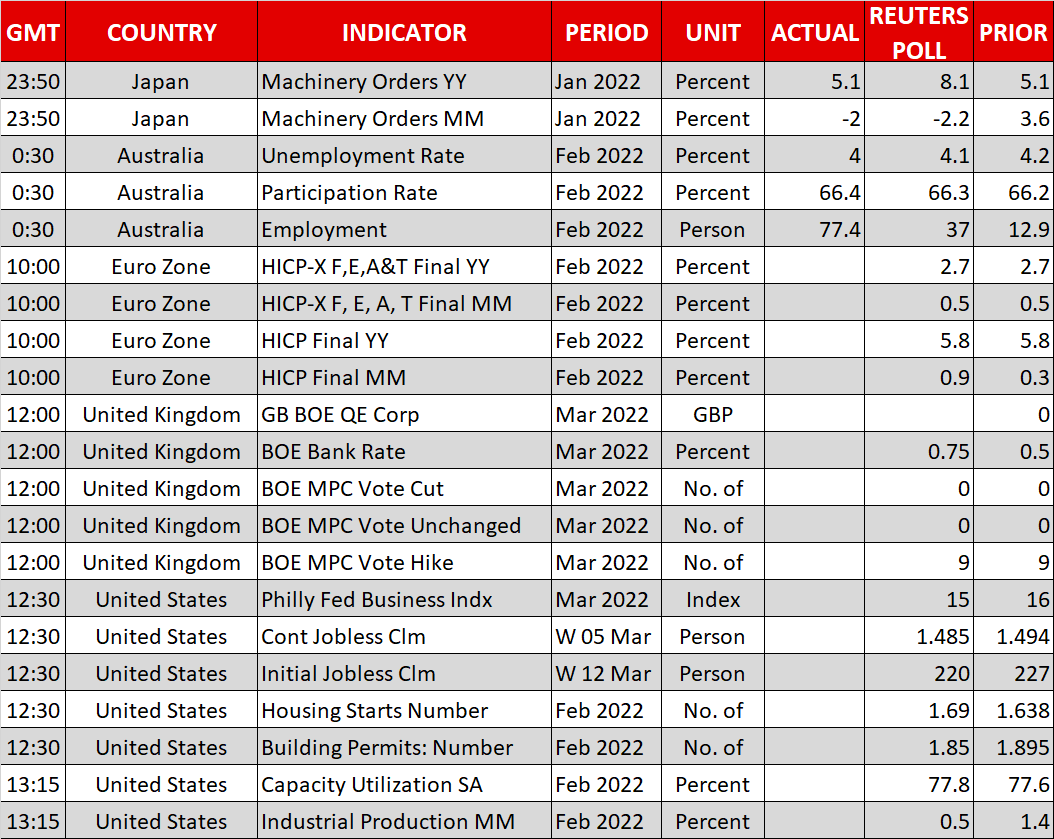