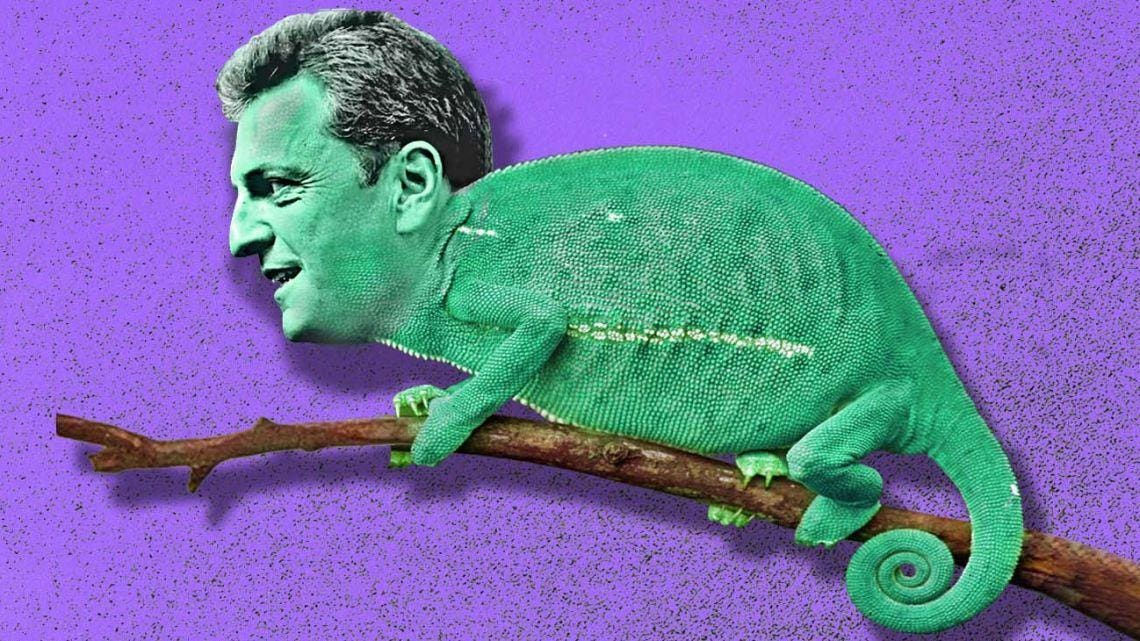 Sergio Massa has always been a divisive character in Argentina, particularly within the ruling coalition, the Frente de Todos. Charismatic and energetic, he’s been accused of being overly opportunistic and extremely ambitious. He’s never hidden his intentions to reach the presidency, playing his cards in the 2015 election by helping to fragment the Peronist field, facilitating Mauricio Macri’s victory over his sworn enemy, Daniel Scioli. Having been a fierce critic of Kirchnerism—just like President Alberto Fernández—he agreed to join an electoral coalition along with Cristina Fernández de Kirchner and other Peronist sectors that ousted Macri but never managed to produce a cohesive and efficient structure to run the government. Eager to gain influence, he was distrusted by both Cristina and Alberto, blocking his entrance into key posts throughout the slow-motion train-wreck that has been the Fernández-Fernández administration, but his persistence allowed him to construct the image of a “savior ” that is the only one capable of getting the country out of the critical mess it’s in. For whatever reason, he seems to have finally broken the psychological resistance of his fellow “shareholders” in the Frente de Todos, and will now take the reins looking to position himself for 2023.

Just like Donald Trump, former Argentine president Mauricio Macri has a thing for nicknames, maybe a habit learned during his days running popular football club Boca Juniors. In one of his longest lasting political acts, Macri dubbed Massa “ventajita,” which roughly translates into “petty advantage.” It hurts Sergio, who to this day acknowledges the political damage caused by that moniker. It’s painful in large part because it’s true, even though that could probably be said of most politicians in Argentina and around the world. He’s been an astute politician that built a bastion of power in the Tigre municipality in the outskirts of Buenos Aires, and a strong presence in the national government by the hand of Néstor and Cristina Kirchner, before breaking only to beat them in the 2013 midterms and became the catalyst of Macri’s presidential victory in 2015, as mentioned above. He replaced Alberto Fernández as Cabinet Chief in 2008. His position towards Kirchnerism hardened as he distanced himself from them, claiming in electoral rallies that he would jail corrupt officials and remove members of La Cámpora political organization—which responds to Máximo Kirchner—from official posts .

Macri never formally entered into a political alliance with Massa in 2015 as his star political advisor, Jaime Durán Barba, convinced him he could take the Casa Rosada alone. Yet he brought him along to one of his first overseas trips to the World Economic Forum conference in Davos, where the victor was hailed as the slayer of leftist populism in Latin America. He lent his legislative support to Macri and Buenos Aires Province Governor María Eugenia Vidal until the 2017 electoral campaign. By then consolidated as one of the leaders of the opposition from his Renewal Front, he sought to create a moderate coalition in 2019 along with former Economy Minister Roberto Lavagna and others, only to be lured back alongside Cristina and the Kirchnerists in an anti-Macri coalition that emerged victorious under the guise of moderation. Thanks Alberto.

A pragmatist, Massa ran the Chamber of Deputies alongside Máximo Kirchner and is known to have a great relationship with Cristian Ritondo, president of the Pro party block in Congress, and Horacio Rodríguez Larreta, Mayor of the City of Buenos Aires and the opposition’s leading candidate for 2023. He has strong ties with the private sector, which have many times been called spurious, and a good network in Washington DC, including the disgraced Rudy Giuliani. The going rumor for quite some time was that Massa was looking to jump from the legislative to the executive branch in order to gain exposure and show efficiency in a government criticized for its consistent procrastination. He had been a strong critic of former Economy Minister Martín Guzmán, but lent a hand in closing the final deal with the International Monetary Fund. Ultimately he felt betrayed by Guzmán and accused him of exacerbating the current economic malaise.

While the political class as a whole has lost the trust of the people—not just in Argentina—Massa shares prohibitive public disapproval rates with the worst of the worst: Cristina, Macri, Alberto, Kicillof, and Máximo K. Whether unfair or not, he’s also earned the nickname ventajita for part of the public which celebrates his every move with a flood of memes on social media. Distrusted by a part of the opposition, he is aware that this is an important opportunity for his presidential aspiration. He appears deeply aware that Argentina is stuck in a fatal economic crisis where inflation must be defeated at all costs, which means both reducing deficit spending and regaining confidence. His expertise is in the public sector, where he has built a large network that will allow him to build consensus, and the private sector, where he counts with the support of several of the most influential businesspeople in the country.

He recently turned 50 years old, making Massa relatively young for a politician aspiring for the presidency. His ambition is such that he is willing to take a chance despite a phenomenal crisis that is as much economic as it is political. Alberto and Cristina didn’t really seem to have another choice as the peso-dollar exchange rate spiraled out of control, inflation continues to rise, and no one is stepping up to the plate. He was given control of several key areas and was initially well received by the market, and several friendly media outlets. Hold on to your seats, it’s Massa time.

This piece was originally published in the Buenos Aires Times, Argentina’s only English-language newspaper.