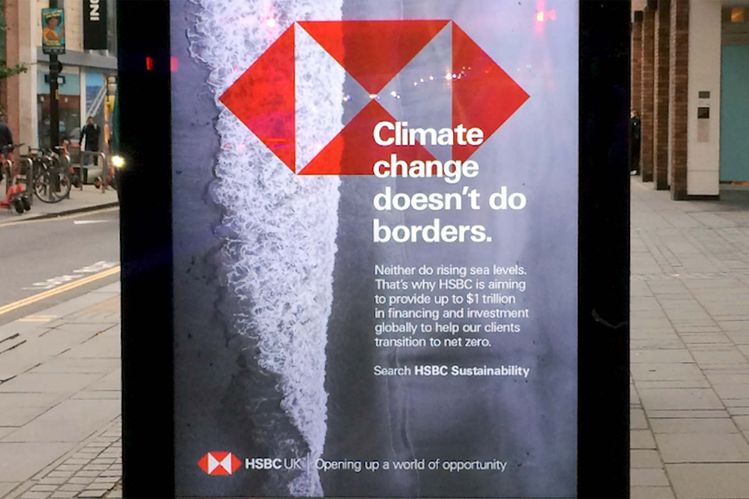 The Advertising Standards Authority determined that two posters for HSBC, which included statements about transitioning to net zero and planting trees, were “misleading” because they left out “material information” about the bank’s contribution to carbon dioxide and greenhouse gas emissions.

The final ruling seen by Financial News marks the first time the regulator has come down on a bank for greenwashing.

“This is a significant moment in the fight to prevent banks from greenwashing their image,” said Robbie Gillett from campaign group Adfree Cities, which led the complaint.

“HSBC can no longer ply us with ads pretending they are green while continuing to bankroll climate breakdown in the background.”

The ads, which attracted 45 complaints overall, were plastered on bus stops in Bristol and London in October 2021 in the run-up to the COP26 summit in Glasgow. One claimed the bank would provide up to $1tn in financing for the transition to net zero, while the second said it would plant two million trees, locking in 1.25 million tonnes of carbon.

The first claim was taken from HSBC’s 2021 group annual report and accounts. However, the same report also puts the bank’s current financed emissions at 65.3 million tonnes of carbon dioxide per year for oil and gas alone, the ASA noted in its assessment.

“We understood that figure was likely to be much higher once other carbon-intensive industries such as power and utilities, construction, transport, and coal mining had been analyzed and included,” the ASA said.

The ads were run before HSBC unveiled groupwide plans to phase out investment in thermal coal. Although the bank and its asset management arm have vowed to drop listed securities that derive more than 2.5% of their revenue from coal in the EU and OECD markets, it has until 2040 to phase out these holdings globally.

Responding to an earlier draft decision from the ASA, HSBC said financing dirty industries was required in order to support the transition to net zero, meaning it had not contradicted itself.

It also argued that since the ads had appeared at a time when there was a period of heightened media and corporate engagement on climate change ahead of COP26, this would have affected how the average consumer understood the claims made.

“We acknowledged HSBC’s comments that COP26 had received widespread national media coverage around the time the ads were on display,” ASA said. “However, we did not consider that meant that consumers would understand the intricacies of transitioning to net zero, and would not expect that HSBC, in making unqualified claims about its environmentally beneficial work, would also be simultaneously involved in the financing of businesses which made significant contributions to carbon dioxide and other greenhouse gas emissions and would continue to do so for many years into the future.”

Polling by campaign group Market Forces in January 2021 found that only 19% of HSBC customers were aware that the bank funds fossil fuels, Gillett noted.

HSBC’s fund arm had around $3.4bn tied up in coal assets as at the end of November 2021, according to the Global Coal Exit List.

Andrew Simms from Badvertising said that while the ASA’s decision was “welcome, it’s taken a whole year to reach this conclusion”.

“As long as we have a regulatory system that shuts the barn door so long after the greenwash horse has bolted, the public will continue to face false claims by powerful polluters and their financiers.”

To contact the author of this story with feedback or news, email Kristen McGachey

Here’s where to find the properties with the best yields

Roivant to Report Financial Results for the Third Quarter Ended December 31, 2022 on...