Week Ahead – Flash PMIs to bring recession risks to the forefront, SNB meets

After a busy period of central banking and geopolitical events, the upcoming week will be somewhat calmer. But there is still plenty of activity ahead as the latest PMI figures are due and the SNB will continue to maintain the theme of monetary policy, not to mention how the war in Ukraine will unfold as ceasefire talks progress slowly. Are Eurozone PMIs Signaling a Slowing Economy? The fallout from the conflict in Ukraine has profound implications for global markets and economic prospects, as the world emerges from another crisis while also plunging into a new one. But the most shocking effect was on inflation, as sanctions on commodity-rich Russia added to already boiling price pressures.

Since the Russian invasion of Ukraine, rising prices for everything from energy, agriculture and metals commodities have put pressure on businesses and consumers to worsen, raising fears of a recession. Europe faces a greater risk of another recession after years of relying too heavily on Russian oil and gas to meet its energy needs.

European exporters will also have to deal with the consequences of tough Western sanctions, and coupled with soaring input costs, business confidence has already begun to decline. The euro zone’s March PMI data, due on Thursday, is more focused on Thursday as investors want to see whether geopolitical turmoil at the European Union’s doorstep is crippling economic activity.

The ECB has just announced that it will end its asset purchase program sometime in the summer, but has not committed to a timetable for rate hikes. If the PMI data is weaker than expected, rate hike bets could be reduced and the euro could slide again, having just rebounded from a 22-month low against the dollar.

The SNB is not expected to change its policy path, and EUR/CHF’s losses were also quite pronounced. EUR/CHF briefly fell below par on March 7 as the fighting in Ukraine intensified and speculation grew that the European Central Bank would delay the withdrawal of stimulus measures. The Swiss National Bank may have intervened to depress the franc, but its demand deposit figures suggest it has acted only modestly. 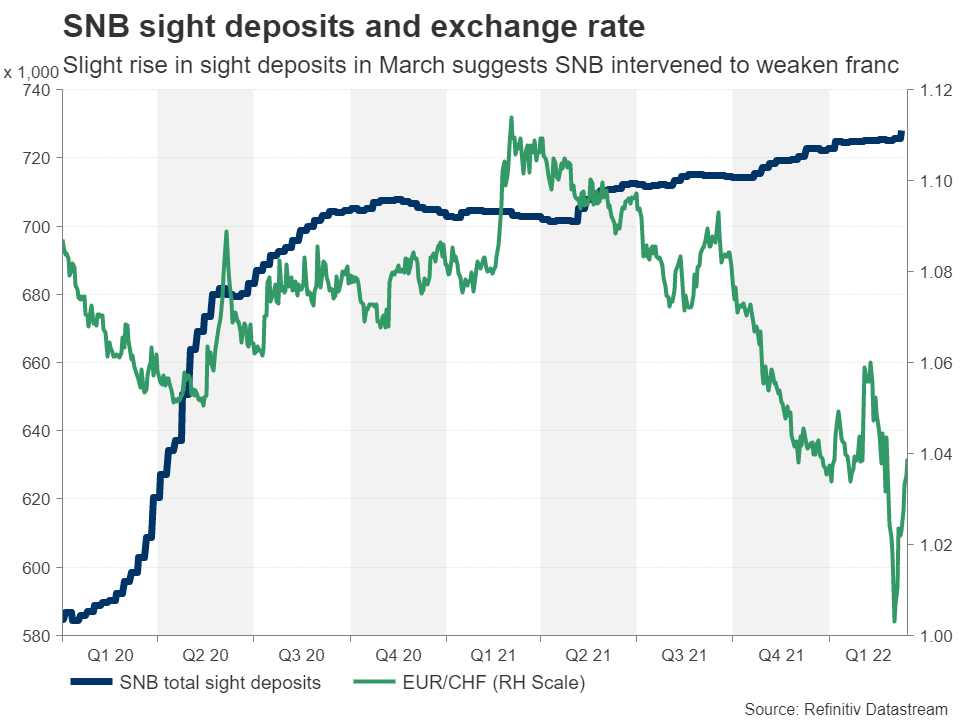 Still, the SNB is expected to reiterate its commitment to intervene if necessary to depress the Swiss franc at Thursday’s meeting, as it appreciates alongside other safe-haven assets such as the dollar and yen during this turbulent time. The Swiss National Bank recently raised its inflation forecast for 2022, while downgrading its growth forecast for this year.

However, inflation is still only at 1.9%, so the SNB is unlikely to signal any tightening as it left its policy rate at -0.75%.

Still, investors still predict the SNB will raise interest rates into negative territory in the first quarter of 2023. But in practice, this is only possible if the ECB does the same. Until then, the SNB is expected to insist on currency intervention to prevent any unprovoked surge in the franc, while geopolitical risks remain high.

Can Sunak stop sterling’s slide? UK PMI data are also due on Thursday and, like the euro zone, they are expected to be lower in March. Also important are February retail sales figures released on Friday. While sanctions on Russia are likely to cause less economic pain in Britain than in the euro zone, investors are already concerned about how inflation and rising energy bills will affect household spending in a consumption-driven economy.

These concerns may explain why the pound hasn’t really benefited as much from the BoE’s rate hikes. The Bank of England raised interest rates for the third time in a row this week as inflation continued to rise. Data on Wednesday is expected to show the UK consumer price index rose 5.9% in February from a year earlier. 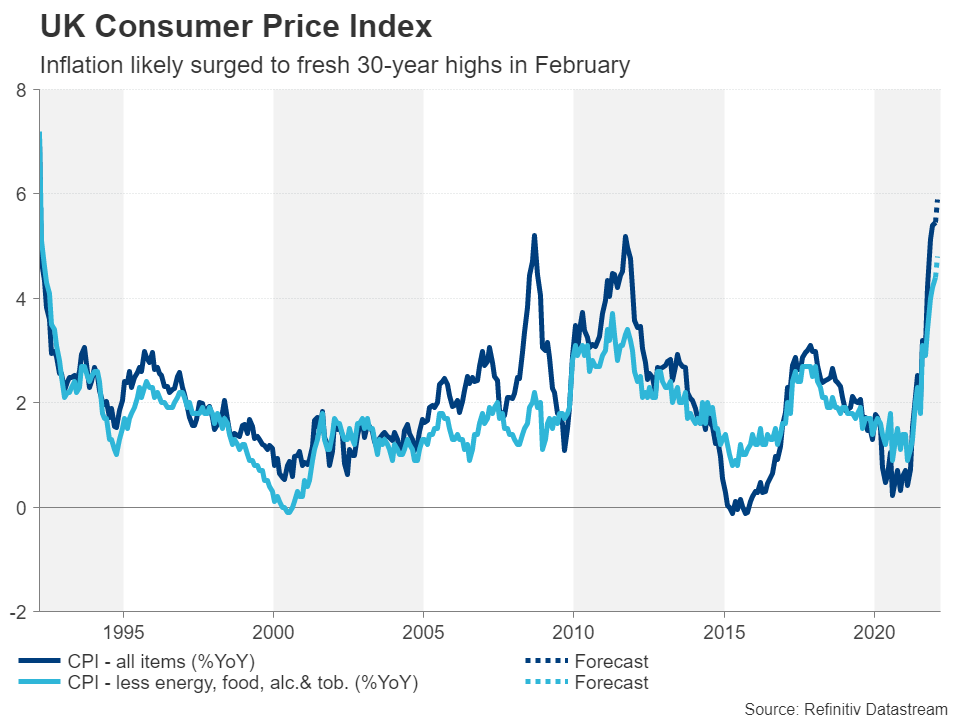 But despite the surge in prices, some policymakers appeared to have turned indifferent to further tightening amid the Ukraine crisis, as the Bank of England voted unexpectedly against it.

Sterling is now at risk of revisiting recent 16-month lows just below $1.30 unless Chancellor Rishi Sunak lays out plans to help households and small businesses cope with soaring oil prices in his spring budget statement on Wednesday.

Sunak is under pressure to provide more relief than the measures he announced back in February, and if he delivers, the pound could recover some lost ground.

Ukrainian headlines could decide the dollar’s direction unlike the Bank of England, the Fed’s hawkish signal at its March meeting couldn’t have been louder. However, the dollar slid after the decision, indicating that interest rate hike expectations are now fully ripe. It’s hard to see how much headwind next week’s second-line data might bring to the dollar.

February’s new home sales will be the first major data on Wednesday, followed by durable goods orders for the same month and Thursday’s final fourth-quarter GDP forecast. PMI data will also be released on Thursday. While these are not as closely watched in the U.S. as the ISM PMIs, investors will still be watching for clues as to whether input and output price inflation is close to peaking and whether growth momentum remains strong in the first half of the year. Pending home sales will end on Friday.

Monetary policy has stole the show in the war headlines over the past few weeks in a key month for central bank meetings. But with the decisions of the European Central Bank, the Federal Reserve, the Bank of England and the Bank of Japan now over, geopolitics could be in full swing again. 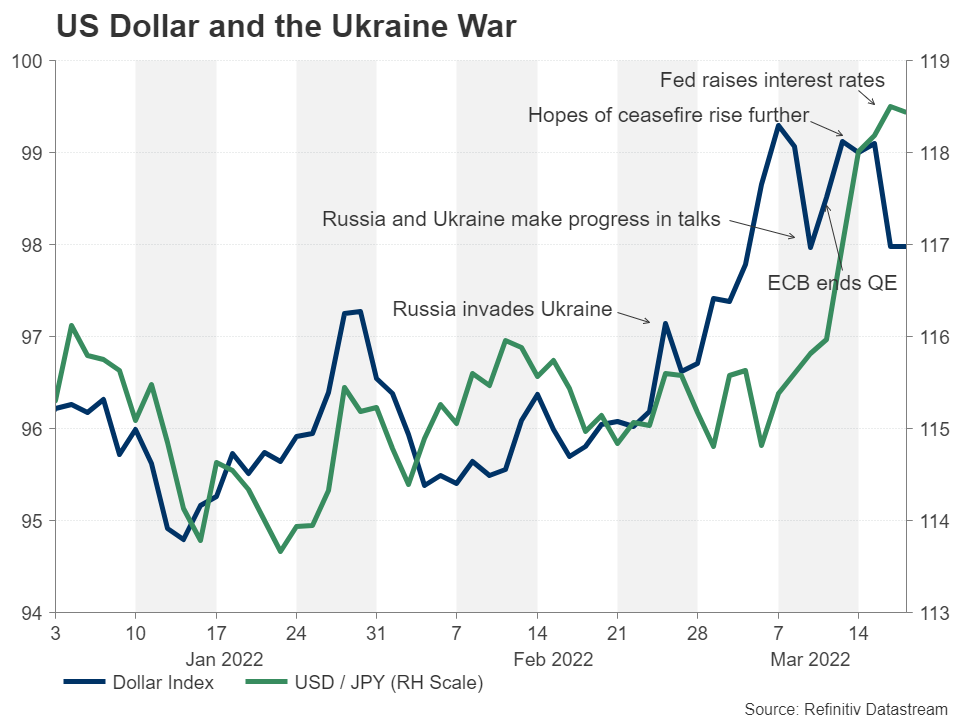 If a ceasefire effort between Russia and Ukraine fails, the dollar could resume its uptrend, putting pressure on its main rivals the euro and sterling.

Sleep Count: Mattresses That Give Back (NASDAQ:SNBR)

FedEx Has a Ground Problem, Here’s How It Plans to Dig Out of It